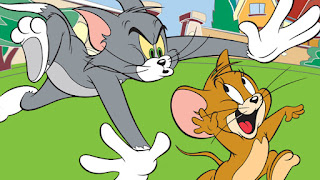 It's publication day for And Then She Ran my second psychological thriller, described as a cat-and-mouse story as the main character Grace flees America with her baby, but suspects she's being followed.

I've always enjoyed the cat-and-mouse plot element in fiction, the pursuit, near capture and flight, the near misses and showdown, the psychological dance between characters that keeps me on the edge of my seat. I've read and watched many stories on this theme over the years and have picked out a few of my favourites.

1.  Madam Will You Talk by Mary Stewart

A classic cat-and-mouse tale set in the south of France where a war widow becomes involved with a gang of murderers and a plot to kidnap a young boy and has to figure out who the villains are. Plenty of twists and turns in a story that stands the test of time.

2. The Split by Sharon Bolton

One of the best books I read last year, described as 'a chilling, pulse-racing, emotionally charged thriller about a woman on the run, a deadly cat-and-mouse game at the edge of the world' which I agree wholeheartedly with. Gripping stuff.

The true story of the so-called 'hippie-trail killer' Charles Sobhraj, accused of murdering Western tourists in the seventies who plays a long cat-and-mouse game with the police over many years. Great performances - and outfits.

A stalker/serial-killer series adapted from Caroline Kepnes' novel of the same name, with an oddly charming and likeable protagonist in bookshop owner, Joe (despite him being a stalker/serial killer.)

The Alfred Hitchcock film, based on the book by Patricia Highsmith, is a classic cat-and-mouse tale and one of my favourites - a chance meeting between two men on a train, speculating what it would be like to commit the perfect murder, with a private investigator on their case. A brilliantly constructed story.

A film starring Claire Foy as a woman who tries to join a support group after being pursued by a stalker and finds herself trapped in a psychiatric hospital. It's shot on iPhone, adding to the unsettling atmosphere of being stuck in your worst nightmare fighting to be believed. It veered a little too close to horror at times - I'm a coward - but well worth a watch if you're braver than me.

Writing during a heatwave

Chiltern Brew Cafe Garden It's thirty-one degrees today and while we've been waiting - it seems - forever for summer to arrive, the ...