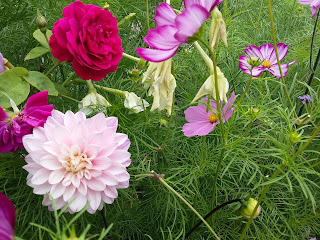 How the months fly by when you're having fun. Or when you're busy. I've been writing A LOT over the past few months - some exciting news may be on the way, she says cryptically - and in between have managed to squeeze in a summery visit from my mother, with associated days out; one at a grand manor house with beautiful gardens, as my mum doesn't have one of her own and loves photographing flowers.

I've also become a volunteer dog-walker at our local rescue centre, which is rewarding - though on my first walk with a patient and dogged (see what I did there?) little fellow called Hovis (from Romania) I managed to get lost, my sense of direction no better than it's ever been, resulting in a far longer walk than either of us had anticipated. I had visions of him sleeping soundly for the rest of the week, and hiding if he ever sees me again. Though he's hopefully found a new home now.

I was delighted to have a 'spine-tingling' short story published in The People's Friend this week, but the short stories are more or less on hold for the time being as I've a novel draft to write. And I've a visit to Devon with friends next week, then a short trip to Jersey with Lovely Husband in September. We've never been there, and are looking forward to exploring the island.

I hope you're all enjoying your summer, which seems to have started late in terms of the weather, but it's so beautifully sunny today I may slip my cardigan off ...