Give us a kiss 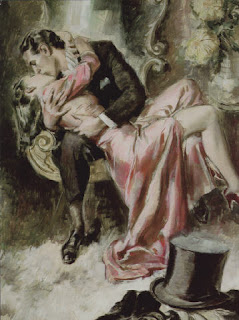 Another area I had to address during revisions was "passion." As in, insert some (pardon my French) during a particular scene. Not something I find easy, especially when I imagine people I know having to read it.

I did write a bedroom scene earlier in the book, but the emphasis there was very much on humour. Now it was time to up the ante (why does everything sound like a euphemism?)

I'm not talking full on rumpy-pumpy with heaving, thrusting, panting and glimpses of hairy buttock. God no. My imagination's not THAT good.

It was essentially an important kissing scene, which needed a bit more oomph.

Naturally I thought about doing some research - picking a snake-hipped, broad-shouldered, taut-muscled, man-totty neighbour to practise on. Except we don't have any.

I did try smouldering at the postman (quite hunky) while I signed for a parcel the other morning, but he looked quite scared and asked if I was contagious. (If my husband's reading this - you know I'm kidding, love.)

Anyway in the end I put on some smoochy music, thought about Sawyer from Lost

and had to be thrown in the garden and doused with cold water an hour later.

Talking of fancies, here's a little joke that tickled mine this morning.

"What did Mary Poppins say after dinner?
SUPER cauliflower cheese, the lobster was atrocious." Ho HO!

One of the things I had to do while editing was make one of my male characters more appealing. Trouble was I'd been writing about him for so long I couldn't get my initial image of him out of my head.

It occurred to me it was his name that was the problem. Names are so evocative, tending to conjure a certain type of person, and the name I'd chosen isn't one normally seen in chick-lit.

Okay, he wasn't called Pogo or Woopsie (apologies to any Woopsies reading) but I had invented a type of character to go with the name. In case any of you are ever daft enough the read the book - IF it ever gets published - let's say I called him Maurice.

Leading men are rarely called Maurice in romantic comedies. If they are you know they're going to be losers in love, gay or somebody's granddad. I might as well have written in ginormous letters "BY THE WAY, SHE'S NOT GOING TO END UP WITH HIM!"

I was reminded of a couple of films I've seen - can't remember their names, I think one starred Sandra Bullock - where the leading lady started out happily married or engaged to a rather non-descript actor I didn't recognise (I watch a LOT of films) and I knew immediately he would wind up dead or dumped in a very short space of time, and I was right - she copped off with Antonio Banderas (or whoever) in the end.

A small detail, but one that gave away quite a lot and I think my character's name would have had the same effect.

Just changing him from Maurice to Hunter-Gatherer (I jest but you get my drift) shifted my perception straight away and I was able to 'write' him more appealingly - I hope. No more Brylcreem and ham suppers with mummy for my man - no sireee.

Not that he was having ham suppers with mummy - I'm not THAT obvious.

As an aside, it's quite hard getting away from the usual names for leading men - Matt, Nathan, Jack, Zac etc.

Maybe we should start a campaign to bring Cyril, Bertrand, Norman and Keith back into fashion.
on May 11, 2010 30 comments: