Yesterday at work we were discussing the weekly coffee mornings at the library, and I was asked if I'd be interested in giving a talk about being a writer.

Inside my head this happened ... 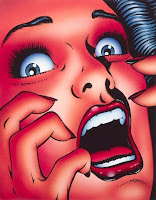 On the surface I smiled pleasantly, though my first instinct was to scream NO! I once gave a 'best man's' speech at a friend's wedding years ago, and have never been so close to vomiting and fainting all at the same time, even though it went quite well in the end.

I hate that feeling. I'll shake, my voice will shake, I'll go red and the audience will know I'm nervous and feel nervous for me. However, IF I ever get published *cough, in this country, cough* I might be expected to give a talk here and there, so I figured it could be a good way for me to cut my teeth. Who would these people at the coffee morning be, I queried.

"Oh you know a few old dears, some mums, people wanting to support the library, that kind of thing. There's one old man who likes to come in for a cup of tea and a sleep."

I said I'd think about it. And then I said no. Because I'll only spend the next few weeks fretting about it and making myself feel ill otherwise.

Also, I feel like a fraud without an actual book I can hold up to prove I AM a writer. I can just picture the scepticism as Gladys demands to see my credentials, wanting tangible proof that I know what I'm wittering about.

Secondly, if it was people specifically turning up to hear someone talk about writing it might not be too bad, but it's not. Topics vary from week to week - from Medieval Chesham to finding a job online - but the audience remains the same. I'd only bore them rigid.

If I do ever get that publishing deal I expect it'll be a different story. I'll be begging them to let me give a talk about my 'journey'.

The problem will be shutting me up, but until then I'm keeping it zipped.
on February 18, 2011 23 comments:

The Art of Relaxing 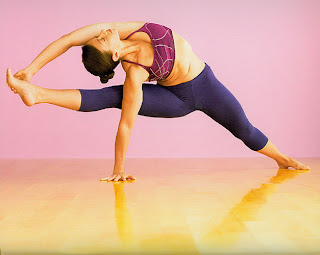 Does anyone else suffer from ET (Extreme Tension) while writing? I'm going to assume the answer is YES, otherwise it might mean I'm freakish.

Mine tends to travel around my body. Sometimes it's in my neck, others my back and at the moment it's all in my tummy. I'm not aware of it as I'm writing, it's only afterwards when I realise I can barely move/breathe/nod my head when somebody offers me cake.

Once it's got a grip of a particular area it stays for a while before moving on, like a grubby student on a gap-year. No matter how many stretches and deep breathing exercises I do before or after - or in between - those pesky muscles tense up the second I begin writing.

It can even get quite painful, but it's such a sub-conscious (unconscious?) thing I can't control it. So what to do?

Well, put up with it I suppose and keep doing the stretches. On the other hand someone's suggested a rather vigorous form of yoga - see above - that's supposed to keep the muscles loose and relaxed no matter what. Thing is I'm a tiny bit worried about snapping my arms or spraining my waist - which would be even more painful, obviously.

Plus I don't have time to learn how to wrap my knees round my throat. I'm too busy writing, see?