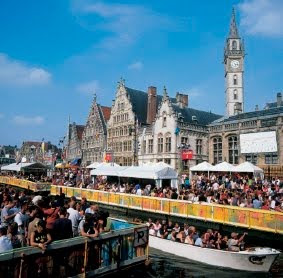 Now, I can't keep saying "no news on the UK-book-deal-front" every time I post.

Well I could, but it would get a bit boring - not to mention embarrassing - so lets just say it's a No until you hear otherwise. And you will hear because I'll be shouting so loudly.

Instead I'll mention that I've just been to Ghent in Belgium with Lovely Husband for a weekend break, which was nice. Sunshine, music, canals and fireworks (and that wasn't a euphemism, I literally mean fireworks) and lots of yummy (fattening) food.

Very relaxing it was and plenty of writing inspiration too, from the woman crying into her mobile phone on the train on the way over, to the pretty American girl who couldn't understand why the elderly couple she was sitting opposite to on the way back were so rude to her, to the group of guys who talked about nothing but beer the whole journey. I guess you had to be there ...

I'm not an experienced traveller as anyone who's stuck with my ramblings over the last couple of years will know (don't like flying or being on water, would prefer to travel via time machine etc) but I couldn't help noticing how much more civilised the attitude to drinking is in Europe.

Considering there were around 7000 people gathered round a canal on Saturday evening - on it, in boats, in some cases - and the festival was around an hour late kicking off, the atmosphere was remarkably relaxed and friendly ...

... and so was I until I came back and realised just how much work still needs doing on the kitchen, but that's a whole different tale. Although I used the chaotic kitchen saga as inspiration for a story for my writing group last week so I suppose something postive has come out of it. 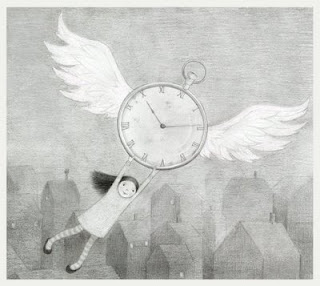 Is it really September? Tut. I turn my back for five minutes and another month flies by. I must be having masses of fun.

Still no UK book deal. Still no new kitchen either. It's getting there slowly, and am sure will be sparkly and lovely when it's finished. In the meantime I'm getting rather used to cooking spuds in a pan of bubbling water on a camping gas-ring in the living room, with the dog looking on in a rather confused fashion.

I've not given up on the UK book deal dream. I've just shelved it temporarily, otherwise I'd never get anything else done. I suppose my natural state is 'unpublished novelist' so it's relatively easy to slip back into that shiny, well-worn groove. The new novel is growing slowly and I've sold some more short stories, so it's all good.

I drove my Mum back up to Scarborough yesterday and discovered for the first time how brilliant talking books are for long journeys. Not on the way there obviously - I've got a talking Mum for that - but coming back the miles whizzed by without me noticing. In fact I was looking forward to getting stuck in traffic for once, but there wasn't any.

Obviously I was still aware I was driving, but part of my brain was so absorbed by Julie Myerson's The Lost Child that I wouldn't have been surprised if I'd ended up up in Wales.

I swore I'd never read that book after all the controversy about it when it came out, despite having read and enjoyed all her novels, but it was so painfully good that I'm glad I did in the end.

And anyway it wasn't reading it was listening, so it doesn't count.