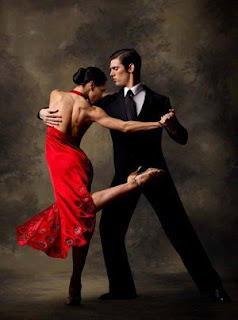 Heart racing, I step under the spotlight.

I know I can do this.

Marco waits, patent shoes gleaming, his gaze as dark and intense as espresso.

The music starts; a throbbing beat to match my pulse and it vibrates down to my feet. I swish my dress back and forth with my hands like Marco taught me, the material shimmering and sparkling beneath a sequence of glitterballs.

My legs are tanned and toned and my shoes no longer rub; I’m accustomed to wearing high heels again after years of sensible flats.

A ripple from the audience sends adrenaline rushing through me and I lift my chin, sashaying forwards like a professional. I still can’t believe we’ve made it to the finals. What started as a hobby – a bit of harmless exercise to work off middle aged spread – has swiftly become a passion.

Marco’s there; narrow-hipped, head tilted, arms outstretched like a matador.

He grasps my waist with confident hands, bending me this way and that, lifting and twisting me as if I weigh less than a feather, his sinewy body briefly pressing against mine.

A few months ago I wouldn’t have believed I could be so flexible, but my muscles no longer protest. Under Marco’s careful tuition I’ve become supple. He’s unleashed a part of me I didn’t know existed; wild and primal, at one with the music.

I’m no longer just Catherine - mother, widow and soon to be grandparent. I’m a dancer and a good one. Spontaneous cheers from the crowd confirm it.

I dip and glide, led by Marco, and the music fills me like a magic potion, lending grace to arms more used to washing up, and a sultry sway to my hips. Smiling proudly, Marco twirls me on the end of his arm like a ribbon.

“Perfect, cara,” he whispers drawing me close, one hand on my thigh, his smokey eyes probing mine. I can feel the thud of his heart through his gossamer shirt and stare boldly back, letting him know with every fibre of my being that I’m ready for more than dancing.

Something flickers in his expression. Understanding dawns and the air seems to tremble as the music builds to a climax. He spins me across the floor, faster and faster and I feel unstoppable, like a tornado, until finally he slows and stops, dipping me over his knee.

I feel the flex of his muscles, the arch of my neck; his firm hand caressing the small of my back.

“Magnifico.” He brings his mouth close to mine and I stare at the shadowy stubble on his jaw, longing to trace it with my fingers. My chest is rising and falling rapidly as the crowd stand up and begin to roar their approval.

“Tonight?” Marco murmurs and I nod, just once.

Satisfied he lifts and turns me to face the audience, eyes blazing, and we take a bow.

“You were splendid,” he says with a flash of teeth and I’m filled with a tumbling joy.

A single red rose sails out of the crowd and lands at my feet. Marco laughs with delight.

“See, amore? They adore you.” He scoops it up and hands it to me with a flourish. “For you, my beautiful dancer.”

His eyes are full of promise and my heartbeat accelerates.

The lights, the music, the crowd and Marco are gone in a flash. I whip round, dazed and blinking, to see my daughter framed in the doorway behind me, smiling.

“Gemma! I, er, was just practising for tonight.” I lower my arms, embarrassed to have been caught twisting, turning, humming and day-dreaming in front of my mirror like a teenager.

“The dress is gorgeous on you, Mum.” Gemma comes in, one hand on her baby bump, and fingers the spangled fabric. “Aren’t you nervous about tonight?”

“Just excited,” I admit, unable to stop a smile breaking out. “I never thought we’d get to the finals.”

“I’m so glad you’ve found something you love doing,” says Gemma, and there’s no denying the sparkle in my eyes and the rosy flush on my cheeks. “It’ll be something to tell your grandchild one day.”

“I feel bad being out so much at the moment,” I tell her, reality rushing in. “What if the baby comes?”

She puts her arms round me. “It won’t, it’s not due for a month. And if it does my darling husband will take me to hospital, so stop fretting.” She squeezes me tight. “It’s brilliant to see you like this again,” she says, a catch in her voice, and I know she’s thinking of her dad. “It’s been five years, Mum and you’re still young. You’re allowed to have a good time. He’d want you to.”

I stare at her lovely, earnest face through a shimmer of tears and wonder what I did to deserve her.

She lets go of me and I squash a lingering image of his lips inches from mine, feeling guilty. What would she think if she knew how I really felt about him?

“It’s so obvious he’s got the hots for you,” Gemma says casually, as if she’s read my mind, and it feels like all the blood in my body has rushed to my face. “And you know what they say about men who are good dancers.” She wiggles her eyebrows mischievously.

"No?” She grins, disbelieving. “I overheard him asking you out the last time I came to pick you up.”

“Oh.” The room seems to wobble and spin. For a moment I can feel the music again, and the pressure of his arms enfolding me.

“What did you say?” Gemma says, her voice soft with understanding, and the music grows louder with every beat of my heart. I imagine his naked chest, smooth and muscular, and turn away so that Gemma can't see the heat in my face.

A fantastic glimpse into a couple of the short stories written by the amazingly talented Karen Clarke, luckily I can continue reading the rest now I've downloaded 'Behind Closed Doors and Other Tales with a Twist' onto my Kindle which is never far from my grasp wherever I go! :)
Jules@S'bro

Thank you, Julia, that means a lot :o)