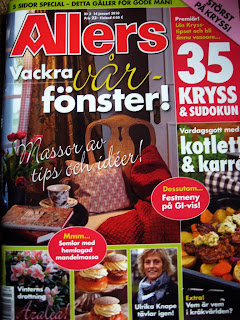 I was thrilled to receive my copy of the Swedish magazine containing one of my stories this week.

I flipped through it a couple of times, admiring a recipe for what looked like cream buns on the way, but ... nothing. I expected to recognise my name, at least.

After a bout of prolonged confusion I emailed the editor and it turned out they'd sent me the wrong magazine. Allers, instead of Allas. They're going to send me the right one, which is nice, and I'm looking forward to translating their translation on Google and reading what they've made of it!

Also, the Lovely Agent has been in touch and thankfully 'loved' the rest of my book.

Bearing in mind she'd only read 3 chapters when I signed the contract, this came as a massive relief to say the least. There's editing to be done. It's 80% there, but needs work, so there's still a small mountain to climb.

I'm ready though - with walking boots and rucksack and a thermos of tea, and enough cake to keep me going 'til I make it to the top and ... oh, enough of the mountaineering analogy. You know what I mean. 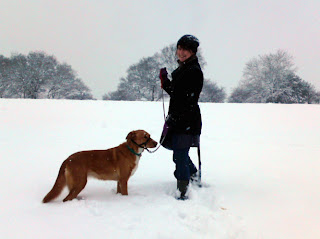 We thought it had gone for good, and then it came back - deeper and whiter than ever. We're snowed in yet again and STILL haven't learnt our lesson and stocked up on essentials.

My daughter and I put on our furriest underwear this afternoon, saddled up Molly and battled our way to the village shop, which is a good two miles away.

Despite advertising itself as The Heart of the Community, it was shut. Shut! You'd have thought they'd have been rubbing their hands at the thought of some local trade for once. The last time I was forced to shop there (when the car was off the road for a couple of days) the bread they gave me came from an enormous chest freezer out the back - I swear there was a dead body inside - the tins of dog food looked pre-war and I was told to "just take" the bag of self-raising flour as it was so far past its sell-by date they'd "only have to chuck it away."

Anyway, unable to accept we'd walked all that way for nothing we lurked outside for a few moments after detecting a light on inside and a small dog wandering around near the counter, and brazenly knocked on the door.

The owner - a grumpy woman who peers over her glasses as if she'd rather not see people clearly - appeared and reluctantly allowed me to scuttle in and make a few purchases - namely a paper, some pre-war dog-food and a loaf of bread from the freezer. It was probably there the last time.

So now we're huddled round the radiators, eating soup and praying the power doesn't go down as it has in some places.

It's a chilly start to the year, but at least I've no excuse for not getting on with Novel two - I can't even get into work.

On the other hand if the power does go off at least it'll stop me checking my emails every three and a half minutes for news from Lovely Agent - the suspense is killing me.
on January 06, 2010 33 comments: