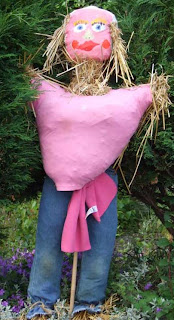 It's m' birthday tomorrow. (Or today. Or yesterday. Or the 27th, depending on when you're reading this.) Twenty-three. I know, I can't believe it either! I usually make a resolution on the day. Much more sensible than making one at the beginning of the year, when I'm still high on mince pies. And not a big Out Loud resolution either, in case I get flak for failing to achieve it, (although maybe I should) but a little one, generally along the lines of "I WILL get the novel finished and Out There this year." Last year's was to get a short story published in a national magazine, which I did (YAY!) but I've reverted to the old one again this year. It seems to be heading in the right direction as opposed to in the bin, which is promising.
However, a brilliantly funny post on Spiralskies blog tapped in to a conversation I had with Teen Daughter today, and made me realise I might have to add another resolution.
"Why do you wear so much brown?' she said, scanning my cords beadily.
"It's the new black?" I offered hopefully. "It matches my eyes?"
"You look like a giant poo," she said.
Right.
Nearly as bad as her comment after my yearly scuffle with the hairdresser, a few months back. "You look like one of the Beatles," she said, stroking my head thoughtfully. I don't know which one. I didn't like to ask.
It's clearly time for a style overhaul.
When I've finished the novel...
on January 26, 2009 30 comments:

Back at the coal face 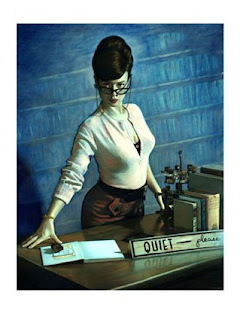 (Sadly, not me.)
Feeling much better now, thanks for your lovely comments, and working overtime at the library again. Sigh. As much as I'd love to turn it down with a languid flap of the hand, I can't. Not with the economy throwing its toys out of the pram every five seconds.
Still, at least I wasn't being asked to assemble a crack team of resistance fighters to rescue a British agent from behind enemy lines using my feminine wiles, before assassinating the head of Nazi counter-intelligence, like Sophie Marceau in the brilliant Female Agents, which I watched at the weekend. Essentially I'm just returning and issuing books. But still.
I've noticed that the library is nowhere near as busy as it was a few years ago. We've been asked to suggest ways to tempt people in, but as I'm sure I've said before I think you're either the sort of person who uses the library or you're not. I'm not convinced wizardry of any kind will entice people in. I did put forward a case for home-made cake and lashings of tea, but that was for me. While I thought about it. 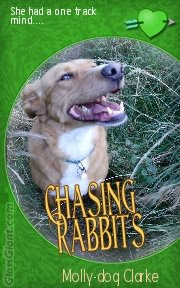 I am trying to get on with the novel, but I've just been diagnosed with a throat infection and it's flippin' painful. As a result I'm a bit flushed and mad today.

To that end, I couldn't resist having a go at making this romance-novel cover at http://www.glassgiant.com/romance/ Yes, I know it should feature a lady with a tiny waist in the arms of a lantern-jawed doctor but, surprisingly, I don't have any photos like that on the computer. I had to improvise with the dog. Poor Molly.

Shocking waste of time, or a bit of harmless fun? I'll let you decide.

Hopefully the antibiotics will kick in soon.
on January 13, 2009 35 comments:

There's a great post on emerging writer's blog about an international literary contest, where brave writers anonymously submit the first page of their novel to be read aloud in front of a panel of agents, who all shout "STOP!" at the point where they'd cease reading. A sort of Britain's Got Talent for writers. Definitely not for the faint-hearted, but it was interesting to read some of the reasons given for not wanting to read on...

The first line is about setting, not about story.

The first line’s hook did not work, because it was not tied to the plot or the conflict of the opening scene.

Took too long for anything to happen (a critique, incidentally, leveled several times at a submission after only the first paragraph had been read); the story taking time to warm up.

Not enough happens on page 1.

The opening sounded like an ad for the book or a recap of the pitch, rather than getting the reader into the story.

The opening contained the phrases, “My name is…” and/or “My age is…”

The opening contained the phrase, “This can’t be happening.”

The opening contained the phrase or implication, “And then I woke up.”

The character spots him/herself in a mirror, in order to provide an excuse for a physical description.

The first paragraph was straight narration, rather than action.

Too much physical description in the opening paragraph, rather than action or conflict.

Opening spent too much time on environment, and not enough on character.

There are LOADS more reasons on the author author site and only 8 on why an agent WOULD read on. Blimey.

I'm guilty of one of the above, but I'm not going to say which (shakes head to clear cobwebs. No it wasn't that one.) I like to think I've done it in a lightly amusing fashion, rather than a cliched one though I'm probably wrong.

Either way it's definitely worth whipping out that first page again and trying to make it really stand out. Thing is, can I keep it up for the rest of the novel?

Email ThisBlogThis!Share to TwitterShare to FacebookShare to Pinterest
Labels: novel-in-progress 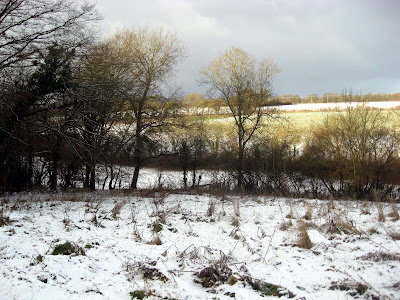 Woke up to lots of snowy lovelieness this morning. Not enough for anyone to skive off college/work, but still. Above is one of the fields where I walk Molly-dog, and here she is in the woods having a marvellous time. She loves snow. 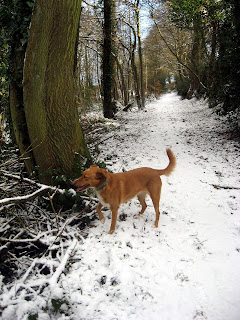 ...well, we both do really. You can't beat it for transforming an otherwise ordinary landscape. Rain just doesn't do it for me, I'm afraid.

I came back, dusted Molly off, stamped my feet on the mat, made myself some hot chocolate and thought, right...back to normal, time to get on with some writing. The house is nice and quiet.

It's not even untidy if you close your eyes and feel your way round the walls, and the wash-pile isn't too high. Unless you're five-foot two. Which I am. And there's plenty of food in the house - at least there was the last time I looked. Even the floors look clean, providing the lights stay off and the sun doesn't come out unexpectedly...oh dear. I knew this would happen.

I have sent out two short stories out and started writing another though.

Finally got home after delivering my mum back Up North, and all that driving has made my eyes spin like Nookie Bear's. Does anyone remember that crazed animal?? (You don't have to answer.) He was operated by a rather suave gentleman with a borderline handle-bar moustache, by the name of Roger de Courcy. I went to see them live, once, at The Futurist theatre in Scarborough. I was clearly a troubled child.
'Pon my return, I discovered via my Story a Fortnight blog that I apparently have not one, but TWO stories in the February edition of Fiction Feast (out now at all good newsagents). I'm very thrilled indeed, but it's typical that I'm the last to know. Even my friend said, 'Oh yeah, I've got a copy here, I thought you knew,' when I rang her. She might as well have added 'blah, blah, blah, so what, I'm not even going to read them.' I think she's getting sick of my girlish excitement. I wonder when the novelty of it all will wear off? I squealed like a tiny piglet when I found out, even though I knew they were going to be published sometime. It's hardly dignified behaviour for a woman my age. Twenty-two for those of you who've forgotten.
The glory days of morning-in-bed-writing are over though. Back to normal next week. Shame as, bizzarely, I managed to do more writing during what is, traditionally, the busiest time of the year than I normally do. And that was despite our boiler breaking down on Monday, just as the temperature outside plunged to -5000. I kept on typing with frozen fingers and managed to churn out 800 words every day for a week, as promised (to myself.) My mum took to creeping along the landing for her shower every morning so as not to disturb me, making much more noise than normal, bless her. "Did you do it?" she demanded every day, when I finally surfaced glazed of eye and wild of hair. I think she liked being caught up in the madness.
Now, I'm afraid that I won't be able to write at all without a duvet wrapped round me, a flask of tea to drink, a tin of Quality Street to hand, Christmas decorations everywhere, turkey piled high in the fridge, crackers being pulled in the background, Emmerdale on the telly, a family game of rummy every night, and my mother in an armchair playing Tetris on her mobile phone. (She's bloody obsessed with that game.)
Must pull myself together...
on January 02, 2009 23 comments: