I'm lucky to have sold four more stories recently - one to TaB weekly magazine and three for the Fiction Feast - and currently have a story in the latest Woman's Weekly Fiction Special, bringing my total sales to 20. Which is nice. Hopefully that means I'm doing something right on the short story front at least.

However, mentioning this to that colleague at the library, when she asked me how the writing was going, led straight to one of those conversations. "That's lovely," she said, all twinkly. "But those stories are written very much to a format, aren't they? Surely once you know the format it's just a case of changing a few details - names, places and so on?"

"It's really not," I said, tiredly. "Guidelines yes, but not a format."

"So you're telling me that every one of your stories is completely different, and I wouldn't guess that they were all by you?"

"Yes they are, and no I actually don't think you would."

"Why don't you read a couple and see?"

You might remember the tale of how I deleted my first ever novel, after receiving a handful of rejections - conveniently ignoring the fact that I also had two requests for the full ms at the time, as well as lots of positive feedback. I was too stupid inexperienced at the time to know that was a Good Thing and literally wrote the story off.

Well, while my Mum was staying recently she said one afternoon, "I've still got that manuscript you gave me to read. Such a shame it didn't come to anything."

WHAT?? For some reason I thought she'd thrown it away, an assumption she was quite rightly offended about. "I'd never do that," she said touchingly.

Anyway, I asked her (nicely) to send it to me and it turned up today almost as good as new. 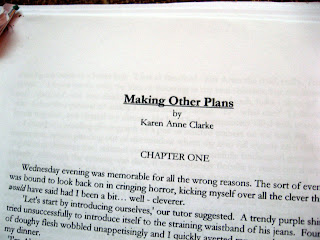 A couple of things struck me reading bits of it. Firstly, the optimum amount of time between finishing your novel and editing it should be roughly 5 years. It really was like reading something written by someone else.

Secondly, it wasn't that bad. Nowhere near as awful as I'd imagined it would be. I could kind of see why there'd been some interest, looking back. There's a cheery simplicity to the writing, that keeps it flowing. I hadn't overthought the story - I didn't even edit it, I was that naive.

I knew what it was going to be about and I wrote it in about three months. It dealt with things that were close to my heart at the time - email dating (don't ask) volunteer work and photography - so I didn't have to try too hard with the research. Well they do say your first novel is the closest to being autobiographical, though I'm sure plenty of authors would dispute that. This one for instance. I hope!

We'll gloss over the fact that I committed the cardinal sin of designing (yes designing, on the computer) a cover page for my novel, with plenty of pink, and a whimsical clip-art female sitting under a tree, which I submitted along with the manuscript. Beyond embarrassing.

But still ... I wish, wish, WISH I could recapture whatever it was I was doing right then, because it occurred to me as I was flipping through it that I can either do it again, because I did it once, OR - I had one book in me, that was it and the moment has well and truly passed. 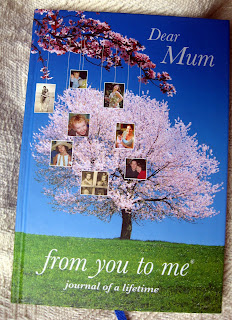 I've had my mum to stay for a week, which is why I've been 'off-blog.' We had a lovely time - in spite of the drizzle - and managed to squeeze loads in.
While she was here it was her birthday and I almost gave her this lovely journal I came across in a local gift shop.

Each page has a heading ... 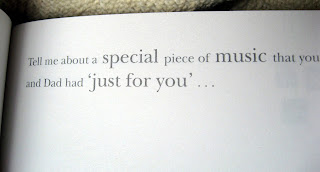 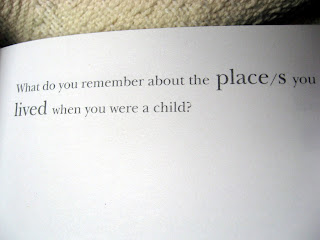 and things like, "who were your best friends when you were at school?" "What was I like as a baby?" "What was my first word?" and so on.

I say almost. Because on second thoughts I realised my mum would be horrified with a present like this.

She's from a generation of Northern women who aren't comfortable being touchy-feely and open about their emotions. If there'd been questions like "do you remember throwing your slipper at us when you were cross?" or "why did we always have corned beef for dinner on Wednesdays?" she might have co-operated - laughed even. "Describe the wallpaper over the fireplace in the house where we grew up," would have had her rolling her eyes and reaching for her pen, but "describe how you felt the first time you saw me," would have had her dry-heaving into her handbag. I know my mum.

Also, her and my dad divorced a long time ago so THOSE questions might have made her upset or cross. All in all, a pretty rubbish present.

Instead I've decided to keep it and write in it myself. I don't mind emoting, and I can't resist a blank page. I know my daughter would love to read it one day too.

I also thought it might be fun to copy out the headings and answer them as the characters in my novel for more insight, because yes - it's time.

Time to get the manuscript out of the drawer (well, up on the screen) and start to think about editing it.