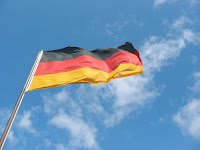 Well...the good news is that I've been offered a two-book deal in Germany.

Apparently my novel went to auction over there and Goldmann's won. That doesn't sound quite right, but I don't know how else to put it!

I'm really thrilled, not least because I'll be sharing a publisher with Sophie Kinsella, Cally Taylor and Stephen King, among others. My husband's particularly thrilled because he lived over there for a while and speaks fluent German. So at least he'll be able to read it.

The not-so-good news is that there's nothing on the UK front - yet. It's still out with publishers though and I'm probably being FAR too impatient. I had no idea that waiting could be so tiring. All that email checking and the effort involved in trying NOT to email-check. It's messing with my chakras.