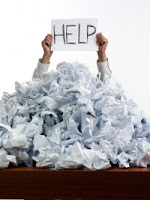 After I got my feedback back from Lovely Agent, regarding novel 2, I re-read my manuscript for the first time since submitting it; about 3 months.  And oh boy - it read embarrassingly like a first draft.
Even though at the time I was convinced it was as good as it could be, it would have benefitted from being thrust under a cushion for a while and a complete rewrite, because things leapt out of the pages, even without the feedback.

A couple of gaping plot holes, a fairly unlikeable main character, and WAY too many repetitions of the word 'heap' for a start. As in 'heaps of fun' and 'piled into a heap' and 'a heap of toast'.  What is it with me and the word 'heap'?  I wasn't even aware I liked the word, and I certainly can't stand it now.

I think at the time I was too keen to get it sent out, worried the agent might think I wasn't up to the task of completing another novel if I messed around for too long - but with hindsight I should have waited a while.

Luckily the holes are easily plugged, and the word 'heap' has been banished forever, but once I've finished the rewrite I'm going to take the advice I've read so many times before, and print the whole thing out for a final read-through (our printer is dodgy so this option never really appealed before).

THEN I'll shove it under a cushion and let it rest for a bit.

After that, I'll send it back knowing it really IS the best it could possibly be; and hope Lovely Agent agrees.
- May 27, 2011 24 comments: 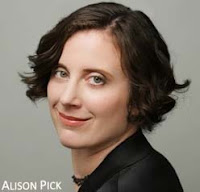 I'm delighted to introduce author, Alison Pick, to my blog.  Alison is the author of acclaimed new novel Far to Go, a beautifully written account of a Jewish family living in Czechoslovakia just before World War II, whose existence is threatened with the arrival of German forces.
I'll be posting a full review of the novel next week, but in the meantime Alison tells us about one of her favourite books ...
To ask a writer about her favourite book is like asking Old Mother Hubbard which of her many children she prefers. Which is to say, there is no single answer, or the answer changes from moment to moment, day to day. Still, though, it’s something I love to ask other people, with the understanding that tomorrow the answer will be different.

So. At the moment, the book I love the most, the one that is keeping me up at night, is called ‘Everything I Ate: A Year in the Life of my Mouth.’ It is a fairly straight-forward concept book in which the author, a photographer, took a picture of every single morsel he consumed over the course of an entire calendar. It seemed, on first glance, somewhat banal. As I started turning the pages, though, I realized it was in fact incredibly intimate. Food is deeply personal, we all know that, but to see these photographs laid out, mediated only by the barest amount of text, was like reading someone’s private diary.
I wanted to look away. I felt I should look away. But I just couldn’t.
For someone who spends their life immersed in Literature with a capital L, there was also a palpable relief in a book like this. It was a gift from my old publicist—another reason I love it—and I gather he felt the same. There is no investment. You don’t need to give yourself to this book, try the first chapter and see where it leads. Rather, it just takes you and won’t let you go.
Part of what makes this book fascinating is that the author’s eating habits are atrocious. From January to December there is nary a vegetable to be seen. A handful of green beans, the occasional salad at a restaurant or a friend’s home. Mostly, though, our hero eats cookies. And cupcakes. And grilled cheese, and burgers, and enough pizza to feed a small African nation. All of this is documented without the least trace of self-consciousness. On the contrary, I came away with a sense of the author’s true reverence for food. What we eat, he seems to imply, is who we are, and both are cause for celebration.
I don’t think it’s too much to say that this book will change the way you feel about food.
Warning: It will also make you hungry.
*I already am, Alison!
You can read more from Alison at She Reads Novels and she'll be stopping by The Book Club Forum tomorrow.
Thank you to Headline for my review copy
- May 19, 2011 53 comments:

Murder in the aisles

I've been in Tesco's a lot lately. Not shopping. That's waaaaaay too boring.

No instead, I've given up a child for adoption, had a couple of affairs, abseiled down a mountain, murdered a woman on a cruise ship, talked a man out of killing himself, joined a mother and toddler group and made a scarecrow.

Okay, not literally. I've been hunched over my netbook in the cafe there, writing stories, fuelled by tea and cake. It's become an addiction. (Not the cake - that was already an addiction.)

In spite of the noise I seem much more focused than at home, where a starling darting past the window can distract me into cutting the grass, or a hint of cobweb can lure me into hoovering the curtains. Or opening an email can lead to hours on the interweb, laughing manically at a moonwalking hamster on You Tube.

I think the staff are puzzled. They slip round corner where I sit out of sight and sneak looks at me while wiping down tables. I make sure I buy a cauliflower or a chicken pasty or something when I've finished, to show I'm actually a perfectly normal housewife. The family still has to eat.

Anyway, they should be careful or they might end up in my next story, battered around the head with a courgette in the veg aisle.

Of course if I was ever invited to do one of those 'Writing Room' features in a magazine, it would look a bit odd. None of the ones I've ever seen has featured a scowling waiter and a dishcloth, or a man in a vest with a trolley filled entirely with beer.

The novel still has to be edited and I'm working on that too. In between mowing the grass, sucking up cobwebs and laughing at moonwalking hamsters.
- May 12, 2011 29 comments: