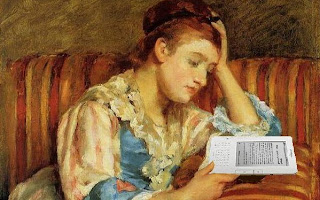 Still wandering down blog-memory lane, I came across this post.

I was pondering the Kindle, which hadn't taken off in the way it has now, and five years on I've finally... FINALLY, given in and got myself one of the blighters.  A Kindle Fire to be exact, but not the latest model, because I'll only use it for reading books and manuscripts, and won't require it to do all the singing and dancing with bells on it's undoubtedly capable of.

In a way I thought it only polite I succumb, as I actually have an eBook out.  It would have been rude not to, really.

It'll never replace the traditional book in my affections, but already I'm a little bit hooked.  It's so easy to carry around, and to read whenever required. At the dentist's, for instance, I'm never called in on time and I had to be called in twice today I was so absorbed in the book I'd started reading.  (Mind you, I hate going to see the dentist so it might have been a bit psychological.)

So at the moment, I have a traditional book for bedtime, an audio-book for the car, and now I can whip out my Kindle (that's not a euphemism) and read wherever I am.  Which can't be a bad thing.