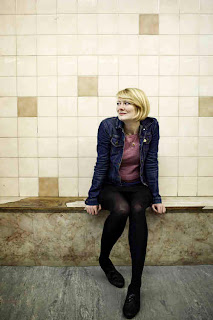 I'm delighted to welcome author, Kerry Hudson, to my blog today as she celebrates the launch of her debut novel, the fabulously titled, Tony Hogan Bought me an Ice Cream Float Before He Stole my Ma, which is the story of a Scottish childhood of filthy council flats and B&Bs, screeching women, feckless men, fags and booze and drugs, the dole queue and bread and marge sandwiches. It is also the story of an irresistible, irrepressible heroine, a dysfunctional family you can't help but adore, the absurdities of the eighties and the fierce bonds that tie people together no matter what.
.

I read the novel over a couple of nights, and it's an absolute corker - funny, sad and a little bit sweary, with a truly memorable main character in Janie Ryan.  I'll post a full review next week.

In the meantime, Kerry's kindly answered some writerly questions, and there's a marvellous competition you might be interested in afterwards, so do carry on reading ...


Kerry, where did the idea for the novel come from?


I come from a long line of fishwives and fishermen and they were all big story-tellers so I grew up being told stories and automatically framing whatever was happening to me or the family in those 'story-telling' terms. When I was writing short stories in my mid-twenties I started writing few that reminded me of my Grandma's and Mum's stories and I thought it was maybe time to continue that tradition, I just did in on the page and not in the pub.


I love the Scottish dialect. How do you write it so it doesn’t overpower the reader?


I made a decision from the first draft that the dialect would only be used in dialogue and then sparingly with specific words where it would have the most impact without affecting the pace and rhythm of the text. I hope it means you get a real impression of the voices and the unique language of the Ryan's without having to untangle the full dialect.


Can you tell us about your journey to publication?


I've written about this fairly widely because I know it has always been one of the aspects I've been most curious about with other authors! I won a competition on a website called Red Bubble with a flash story which gave me  the confidence boost I needed to continue writing and try to place in literary magazines. A good few months down the line a literary agent heard about my competition win and said she'd read some of my stories and provide some feedback. I hurriedly pulled some stories together and in my covering letter I mentioned I thought they might make the basis for a novel. She wrote back to say that if I wrote the novel then she'd like to see it and so I took six months off work, went to Vietnam and wrote Tony Hogan.... On my return to the I sent it to the agent who signed me and then, about seven months later, I signed with Chatto and Windus. I'm aware (and dizzyingly grateful) that this is a very quick and smooth journey to publication – I really think so much of it is reaching the right person with the right book at exactly the right time.


Do you work with an outline or just start writing?


Usually I've been thinking about my next novel or story for a few months before I write a word (I'm mulling novel three at the moment) and then I write a double-sided A4 sheet with all major incidents of the novel. Beyond that I sit down to write the first draft and play a game see how I'm going to from one incident to the next. For me, this makes me feel I've a safe foundation to work from but still have freedom to explore possibilities.


Do you have a ‘beginner’ novel stashed away in a drawer?


I don't no, Tony Hogan... was my first. I wrote short stories before that though so there's lots of those abominations stashed deep inside my hard-drive!


What’s a typical writing day for you?


I work full-time at the moment so there's not really a typical day – I just grab the hours when I can. At the moment that means getting up at 6.30 for an hour before work and then going to a cafe for a few hours after work. On the weekend I'll decamp myself to the Royal Festival Hall or British Library and write the for whole day with many, many tea and cake breaks. I always know what I need to do that day which is usually my daily 1000 words (more on the weekend days) and then additional things like writing admin, publicity things for Tony Hogan... some blogging etc.


What do you do when you’re not writing?


There isn't that much time between writing and work at the moment to be honest but I'm very protective of that little spare time as I'm well aware my mind and body might pack up if I don't give them some treats. Things I love and squeeze into this time are: food, reading, running, films, photography, Guinness and wandering the city with a coffee. I'm lucky to live in where if you have three hours spare you have all of the above in abundance on your doorstep.


I know you’ve travelled a lot – how does it influence your writing?


Funnily enough, until writing my second novel Thirst (during which I received an Arts Council England grant to travel to for research) I've never really incorporated my travels into my writing. It influences less directly I think in that when you're travelling you're so much more open and curious to everything around you. I also definitely do my best writing when I'm travelling because I'm away from all the noise of my life; travelling strips you right back as a person...there's just you and a bag and uncertainty and I think that's a really good starting point for writing.


What’s the best thing about being a writer?


The writing. It's a huge privilege to be able to write what we want to with total freedom.


Which authors do you admire?


Too many to mention but Janice Galloway, Jeanette Winterson, Roddy Doyle, Toni Morrison, Douglas Coupland, Anne Tyler, Truman Capote...do you have all day?


There were lots of 'lumps' of things in Tony Hogan...I mean a really ridiculous amount, I did a lot of lump removal during the edits. Oh, and imagining that somehow every day has 67 hours rather than 24 hours.


What’s the biggest myth about being a writer?


That it's a job reserved for a certain type of person. There are so many stories out there that should be told.


What are you working on now?


Mainly the epic Tony Hogan Blog Tour! But once that's over next up is a short film script in collaboration with the brilliant MoshBreakBoogie Productions who made the Tony Hogan trailer (http://www.youtube.com/watch?v=8DIoNwDIB_w ), then I'm adapting Tony Hogan into a play and I'm keen to start on novel number three. See what I mean about those 67 hour days?


What advice would you give aspiring authors?


The same thing I tell myself every day: work hard, be kind, be honest and keep at it.


It’s my theory that all writers love cake. What’s your favourite?


Your theory is absolutely correct – we need that sugar! My favourite is a coffee eclair (or two if no one's watching).


Thanks Kerry. I must try a coffee eclair. And a 67 hour week would be useful.

Now for that competition ...

This prize draw is open to anyone who hosts or comments on a Tony Hogan post. There is no purchase necessary. There is no limit to how many times a name can be entered i.e. if you comment on three blogs you have three entries but it's only possible to win one prize per person. The winning names will be drawn at random on Wednesday 1st August and announced on Kerry's Tumblr blog and on Twitter.

1st prize - A three chapter or synopsis critique plus afternoon tea at Beas of Bloomsbury, (at a mutually beneficial date and time) with Juliet Pickering from the AP Watt Literary Agency to discuss your critique. Plus a personalised copy of Tony Hogan Bought Me an Ice-Cream Float Before he Stole My Ma.

2nd prize - A  literary hamper containing a personalised copy of Tony Hogan Bought Me an Ice-Cream Float Before He Stole My Ma as well as three of my most recommended writing theory books and Hotel d Chocolate chocolates to enjoy while reading them.

3rd prize - A personalised copy of Tony Hogan Bought Me an Ice-Cream Float Before He Stole My Ma.