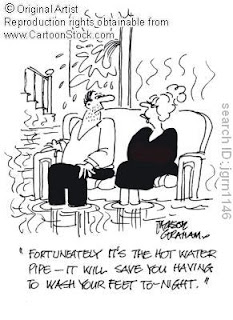 Hi Karen, glad to see you back in bloggerland. Good luck with the novel writing, love that cartoon.

I'm glad the writing is going so well.

I had burst pipe damage in a previous house and ended up being out of it for 3 months while ceilings etc were replaced. Hope yours is sorted soon.x

Good luck with the writing projects and with getting your ceiling sorted.

Glad all your writing is going well :-)) and good luck getting your ceiling sorted! X

Aaaah Clarkey, the sky be the limit with your writing m'dear unlike that blinkin' ceiling! Water, water everywhere. Bugger. I've got a flipping freezer that thinks it's a cooker. Overheating every couple of weeks. We're living out of packets and tins at the moment ;-)

I don't know why but leaks in the house terrify me. I'm not at all scared of water in rivers and seas, but show me a drip on the ceiling and I turn into a quivering wreck!
Glad you've got a story out of it x

Hi Karen - sounds like your writing is going really well. That is fantastic. Had to smile when a story idea came out of that awful incident - what a trooper you are! Hugs. :-)

Great to hear how well you're writing is going. And yes, expending energy definitely needs a reward! Hope the roof gets fixed okay - love the cartoon.

Oh dear. You are having a rough time with housey things!

Great to hear things are going well and that even the 'problems'are providing inspiration.

Aah Karen - that's a sign of a true writer, inspiration out of everything. SO glad to hear the writing is going so well, but SO sorry to hear about the ceiling - do hope sorted soon. Love and hugs :o) xx

Oh dear... Nothing like plumbing issues to cause me to twitch. But if you have a plot forming, all's not bad.

Glad writing is going well. 10,000 words a day - are you actually human?! 1000 would be stratospheric for me. A few hundred would be much more like it! See, now you've depressed me no end; feeling inadequate now...LOL x

I am astounded by your 10K daily word goal. Wow!

Just to give you a little more about the raptors at the library event (which I highly recommend!), our event was co-hosted by the Audubon Society (I don't know if there's a version of that in the UK), and they had all kinds of other activities, in addition to the birds: build a pinecone bird feeder, make binoculars out of toilet paper tubes, make a field journal, and complete activities to get a free bird guide. It was lots of fun!

Hello Karen, thanks for stopping by at my blog and commenting! I have just found your blog(s); is this the one you currently post on? Also, I have seen that one of your books is available for Kindle. My Kindle is still brand new and very empty, so I think your book will soon make its way to it :-)

Susan thank you, I must post more often though - I can't believe almost a month's gone by since this one!

Thanks Debs :o) Your burst pipe damage has put ours in perspective - it could have been so much worse.

Thank you Colette, the ceiling's as good as new now!

Good on both counts, Amanda :o))

Ooh we've been there Tommo, when we were having our new kitchen put in - lived off ready meals for nearly five months! Hope you've stopped overheating now.

Teresa, I was really scared because it was dripping through the lights and I was certain some sort of electrocution was going to occur. Luckily it didn't!

Ooh Diane you've just reminded me about the story idea I had which, I'd completely forgotten in the meantime :o)

The cartoon did make me smile Rosemary, and the ceiling's fixed now thank goodness!

I might have to take you up on that lovely offer, Bernadette - we're overrun with mice at the moment!

It's funny how part of my brain is always wondering if there's a story in a situation like that, Cait!

It could have been a lot worse, Anna, and at least I could still get in the kitchen to make a cuppa :o)

Lydia, that should have read 1000, not ten!! I was obviously traumatised by the burst pipe :o)

My fingers must have slipped on the keyboard, Alison, as I'm certainly not capable of bashing out 10,000 words a day! Wish I could though. The library activity sounds great - I think there'd be too many 'health and safety' issues to do something similar over here, unfortunately.

Hi Librarian, and welcome :o) This is the blog I post to, but not as often as I should. How lovely of you to download Tears and Laughter, I hope you enjoy it.

I put the new Microsoft Office 2010 Professional installed on daughter's new computer, she was pleased to say that this is a good software, very easy to use. Thank you for providing this great office.Your marketing is in great hands--your own, with Microsoft Outlook 2010. Now you can create engaging brochures, newsletters and emails cost-effectively.

Am I the only pedantic one to spot the spelling mistake in the cartoon? (Sound of tiptoeing away quietly...)