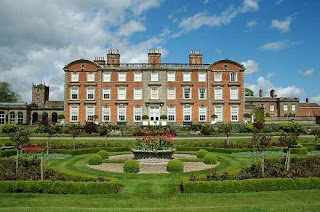 Do you have recurring Things cropping up in your writing?
on January 06, 2011

Doors and doorways. If I don't keep an eye on my characters, they spend half their time going in, coming out, or hovering in doorways. I have no idea why.

My characters never seem to have parents. They are always dead, usually from a tragic accident. My parents are very much alive and as far as i know I don't carry any I'll will for them.

Water. There's almost always some kind of water involved, whether it's just a mention or prominently put into the story. Usually in river form.

My characters spend all their time eating and drinking. Gives them sommething to do with their hands I suppose. And in my current novel cigarettes are turning up quite a lot.

My characters are always drunkards. I'll say no more.

I have a houses thing too - not always big but always old...

loved what the others said and it would be interesting for a psychologist to look at them too.... :-)

queenie - Good you don't have big houses too or they'd never do anything else!!

kari marie - Now you mention it, I tend to write characters where one of the parents is dead. I changed that in my last novel and gave her two parents for a change!

the golden eagle - I wonder what it all means. I don't have much water in mine, though funnily enough in my current novel I'm just about to research living on a barge on a canal for one of my charcters! - but maybe it's because I'm scared of the stuff and can't swim?

helenmhunt - Ooh I like writing about food, in fact the main character in my last novel is a caterer. Haven't featured a cigarette yet though!

jen - I'm saying nowt. Mind you, there's a lot of fun to be had with drunkards. As it were.

liz fenwick - Oh yes, you even have one in your title :o)) I'm really drawn to them for some reason.

A psychiatrist would have a field day with all this!

I tend to have my characters living in Edwardian houses, where I feed them rather too much.

Hmmm...that's interesting with stately homes turning up in your work. Maybe it all stems from a past life you've led.

I have inordinate number of nosy types that turn up in my stories. Of course I myself have no interest in what others get up to. No, not a jot!!

Hi Karen, that sounds like a lovely thing to have crop up in your novels. It reminds me of when I did exams at Uni and I always hankered after the Bath stone built buildings like a pregnant craving! I have noticed some of my fav authirs having the same kinds of dwellings cropping up in their stories such as Marcia Willett, but I've yet to notice if I do.
http://scribbleandedit.blogspot.com/2011/01/pulses-will-race-no-kiss-blogfest.html :O)

Big old houses are inspirational. Forests/woods seem to crop up very often. And the sea in second place.

Nice house in the photo. You do realise it is my home don't you? ;-)

I know, I know, I can hear my mother telling me to get my head out of the clouds and plant my feet in reality. Lol.

Tea/coffee. Britain. California. Oceans. Hummingbirds (but only as of late). Baseball.

I've closed my blog and opened a new one, also called The Other Side of Paris. This is my new home:

I've realised I've just subbed two stories which both have main characters called Louise. These Louises are nothing alike. I wonder why that name was in my head. It's not as if I even know anyone called Louise!

My Victorian MC's are beaten up! Just realised while reading your post. LOL

Manor homes and family conflicts are the recurring themes in my writing.

Thanks you for coming by and commenting on my 'disaster' post. I came through unscathed, but many didn't. The clean up will take ages.

BTW I have started a Publication Party for aspiring writers. Perhaps you could drop by and share a few thoughts with us in the comments. Would love to have you!

Crumbs, I clearly haven't been about in blogland for ages to have missed this post! :-O

I find small dogs seem to appear in my novels and short stories quite regularly. Often poodles (probably because I've got one) or Yorkshire terriers appear in the more comic scenes.

very well written, i admire that!!

ghosts loitering round every corner waiting to bash my head in

So funny. Vicious ghosts in those stately homes:-)

I have a weakness for characters who own dogs. I have no idea why;-)

Hm... I can't think of anything recurring in my novels! Wine?

Happy New Year, Karen!
Recurring themes: hummm! Art, countryside, the sea, dogs??? Things dear to me I suppose, so therefore there must be some wine in there somewhere too!
The picture made me catch my breath: I worked in this house for 5 years. It brought back so many memories. It is, incidentally, definitely haunted although the ghosts are quite benign.:) x

Big old houses are fashionable settings for women's fiction,it seems, so go for it, Karen.

I love houses. I have a file on my computer where I store all the details and sometimes, I spend all day going through it and dreaming.

Cats. Breezes. Sometimes even cats and breezes. It's amazing how fond fictionally I am of a passing breeze, considering in real life I'd be wrapped in a ton of jumpers if one even vaguely wandered near me.

What a fantastic selection of recurrences there, and Lydia how weird that you worked at the house in the picture, which I chose at random!

Glad I'm not the only one with Big House syndrome :o)