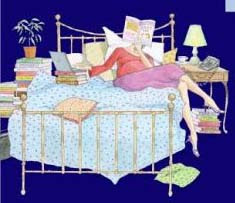 Sadly, she didn't pass. I baked her a chocolate cake just in case and I think she's feeling better about it now. I reckon she'll do it next time.
on February 25, 2009

Aw, commiserations. All the best people fail at least once.

What Honeysuckle said. It took me four goes as well. Yep, it's the journey that counts.

Cake is a great consolation for any upset - especially if it's chocolate cake.

Hugs to your daughter from someone who also failed her first test.

Aw, tell her not to get nervous now next time. my brother took a few attempts. It's the luck of the draw I think. Some really sensible, good drivers fail first time. yet my friend is the worst driver I know and she passed first time. mental.
Bet the chocolate cake was lush!
Lx

I made the most incredible mistakes on my first and onloy driving test. It was a hash from start to finish but the old exmainer, who looked like benny hill with his wee round specs and dirty old flasher's mac, passed me! He must have thought he was on a promise because I was dangerous!

Chin up to your baby girl - she could have been failed because it was the wrong time of the day, he's achived his quota allowed or his wife had just left him! Who knws eh?

Driving tests are just the worse thing ever. I also took four attempts but got there in the end.

The best drivers fail firt time. Nerves have a lot to answer for.

It took me four tests too. Or maybe five. I'm sure it wasn't six.

chocolate is a good soothing balm... next time for sure!

as for Mum... yeah, it needs to come as it does. somewhat organically, without the compost heap, I reckon...

I wonder if Sainsburys carries that, organic writing... :)))

Awh, I'm sure your chocolate cake did the trick!

I failed first time. I went through a red light! Your not supposed to do that, apparently! x

Hugs for your daughter and bravo for you - enjoy the journey. I'll take that away with me today. Thanks :-)
lx

I also took three goes to pass. I didn't really need them to tell me what I'd done wrong. I don't think reversing round a corner is supposed to end up with the car in someone's front garden....

And you are so right about the writing. Recently I've spent a lot of time letting other people's comments on my work stop me writing anything at all. Whatever comes into my mind is a cliche/a worn theme/ too twee/ too strong/predictable etc etc etc. A good idea to go back to writing for the fun of it and see what happens. It can always be fiddled with afterwards!

Four seems to be the lucky number. But unlike you I couldn't drive for the first three! That plus the nerves.

I finally passed in my own car, a fiesta supersport (oh the nostalgia that has just brought back) that the long legged instructor had to look behind to ensure it was safe to do an emergency stop. x

Chocolate Cake is always the best medicine for disappointment. I failed first time too, but well done her for going for it despite all the setbacks etc.

I was so bad I didn't even get as far as a fourth lesson - let alone a test. Hugs to your dd.

And I so agree about relaxing enough to enjoy the writing journey.

Bless her - it feels like the end of the world at the time, but rest assured, the % of people who pass first time is tiny.
I failed my first test, so passing second-time felt fabulous. Chocolate is a healer of all emotional ailments - and that comes with a psychologist's endorsement!

That a nice analogy, I like that. I passed on my third go and I remember sitting in the waiting room with all the other students and instructors waiting to be called and I overheard an instructor tell his student 'just enjoy the car ride, you're in charge'. I took that on board and I passed.
Good luck to your daughter for next tim.
Award for you at mine btw (if you have room)

*time (my spelling tonight is awful)

Oh poor her, though I'm sure the cake helped cheer her up. It would certainly work with me.

R believes that they fail people first time in order to make more money for the driving department (or whatever it's called).

J is taking lessons and has passed his theory, but still has to take his driving test. I'm dreading it.

Commiserations to your daughter - driving tests are horrible horrible things. My elder son will turn 17 in a couple of weeks, so no doubt all this lies ahead for us too. Your comparison with writing is spot on: I know myself how the more I've learnt about the writing industry, the more self-conscious I've become as a writer. In some ways that's a good thing - but the downside is that you are inhibited by excessive awareness and self-judgmentalism. I'm trying to get away from that and liberate my creativity, but it is hard. x

Well I'm glad to see I wasn't the only one to fail first time, and that we're all in agreement about the healing properties of chocolate cake :o))

I failed when I was eight months pregnant with my first daughter! Then she took four tries to pass herself many years later. I think its made her a batter driver though but it did show me how she lets nerves get to her. Wonder where she gets that from?! Fx